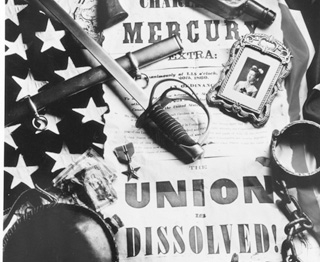 The War Between the States, The War against Northern Aggression, or simply the Civil War was when our country was fighting itself. To the North it was a fight to keep the nation as one. To the South it was the fight to be its own nation. Between the years of 1861 and 1865 Americans made war on each other and killed each other in great numbers. It may have started out as a dispute between Union and States’ rights but it ended up being about the meaning of freedom in America.

In the war homes became headquarters. Churches were no longer places of worship but a place to care for the wounded and shelter the dying. Friends and family fought side by side or

against each other. Four of Lincoln’s brother-in-laws fought for the Confederacy. The town of Winchester, Virginia changed hands 72 times during the war. During this time of unrest, history was being made.

Watch The Civil War History on WPBT2 to learn more about the Civil War and the aftermath of the war itself. The documentary begins airing on April 3rd at 8 p.m. and the last episode is on April 7th at 8 p.m.

Tom Hudson, co-anchor on Nightly Business Report, is moderating a panel at LitLive on March 27th

LitLive! is an annual event of the Broward Public Library Foundation. The event provides  the community with an opportunity to meet 21 outstanding authors and ask questions about their books. The day includes panel discussions, book signings and lectures.

The event is from 12:30 to 5:30 p.m. at the Alvin Sherman Library, Research, and Information Technology
Center on the Davie campus of Nova Southeastern University. Tom Hudson’s panel discussion on the topic Hanging Tough will begin at 2:15 pm. Hudson’s panel will include authors Lee Kravitz, Rob Sheffield and Caitlin Shetterly.

LitLive! is sponsored in part by WPBT2.  For more information visit www.LiteraryFeastOnline.org.

Dolley Madison lived through the two wars that established the U.S., was friends with the first 12 Presidents, and watched America evolve from a struggling young republic to the first modern democracy in the world. She was nicknamed “Queen Dolley,” and when she died in 1849 at the age of 81 — one of the last remaining members of the founding generation — Washington City honored her with the largest state funeral the capital had ever seen for a woman.

WPBT2 premieres Nature: Bird of the Gods on March 30th at 8 p.m.

Living in the depths of the New Guinean rainforest are birds of unimaginable color and beauty.

When Europeans first saw the plumes of these fabulous creatures in the 16th century, they believed they must be from heaven and called them birds of paradise. The people of New Guinea make even greater claims. They say the birds possess supernatural powers and magic. But to find these birds in New Guinea is one of the toughest assignments, and to witness their

extraordinary mating displays is even tougher. David Attenborough introduces a young team of New Guinean scientists on a grueling expedition to find and film these Birds of Paradise; the holy grail of wildlife filmmakers.

All information can be found at www.dtv.gov.  Note:  All locations subject to change.
FCC DTV Contractors:  http://www.dtv.gov/dtv_contractors.html

uVuTV episode 5 is in the can and it marks the first time that uVuTV was shot entirely on location. The uVu crew visited the beautiful city of Surfside yesterday in an effort to get out into the community and bring a more youthful look to the show. Since we have never shot a broadcast show on location, we were eager to play with the new equipment provided to us by production. Our new gadgets included a HDV camera, a lavalier microphone, a wireless lavalier microphone, and our favorite: the boom microphone. Because it was so windy by the beach (gusts of 20 mph) the production crew gave us a special wind proof boom mic, which coincidently looked a lot like a koala bear.

We want to know what drives So Flo residents wild! What’s your favorite food, place, hobby, etc…? We want to know!! Make a one to five minute video about your absolute favorite thing in the world, upload it to our website, uVu  and if your video is chosen it will be broadcast on air and you will be invited on as a guest host for uVuTV, which is seen each week on Digital Channel 2-2 (click here for cable information).

Deadline to submit videos is April 17th, 2008. Open to South Florida residents only. Remember no nudity or graphic content please! And see uVu website for terms of use.  Windows Media or QuickTime video formats are preferred.  Want more info, watch this clip from uVu.

Saturday, March 1 at 6pm and Sunday, March 2 at 9:30pm.  Available over the air on Digital 2-2 (or Comcast Digital Channel 202, Atlantic Broadband Channel 992, all others please check with your cable provider)

Dvorák, Gershwin and Wagner take center stage when the New York Philharmonic’s historic concert in North Korea’s capital city, Pyongyang, airs on GREAT PERFORMANCES. “The New York Philharmonic: Life From North Korea” will be televised February 28, 2008, 9:00-11:00 p.m. ET on PBS. Music director Lorin Maazel will lead the orchestra in Dvorák’s Symphony No. 9, “From the New World”; Gershwin’s An American in Paris; and Wagner’s Prelude to Act III of Lohengrin.