Don't take another bite till you see 'Food, Inc.' 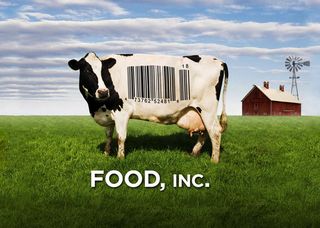 How much do we know about the food we buy at our local supermarkets and serve to our families?

American agriculture has in many respects been the envy of the world. U.S. agri-business consistently produces more food on less land and at cheaper cost than the farmers of any other nation. What could possibly be wrong with that? According to the growing ranks of organic farmers, “slow-food” activists and concerned consumers cited in the new documentary Food, Inc., the answer is “plenty.” As recounted in this sweeping, shockingly informative documentary, sick animals, environmental degradation, tainted and unhealthy food and obesity, diabetes and other health issues are only the more obvious problems with a highly mechanized and centralized system that touts efficiency — and the low costs and high profits thatresult from it — as the supreme value in food production.

Less obvious, according to Food, Inc., is the entrenchment of a powerful group of food producers, which sets the conditions under which today’s farmers and food workers operate, in order to maximize profits. The industry also maintains a revolving door of employment for government regulators and legislators to protect its power to set those conditions. Then there is “the veil,” a strange disconnect — propagated in good part by millions of dollars poured into marketing and lobbying by the industry — between the average American and the food he or she eats. As one chicken industry representative puts it, “In a way we’re not producing chickens, we’re producing food.”

Just one heck of a way to say good-bye

There he is, 'NBR's' Paul Kangas, smiling broadly

For three decades, Paul Kangas has loomed large over the national business scene in a figurative sense, and for 15 minutes last month, he did so literally.

On Nov. 24, a seven-story-tall image of Kangas, the soon-to-retire host of PBS's "Nightly Business Report," appeared on the NASDAQ tower in Times Square.

The bespectacled anchor smiled out over Manhattan.

Below his tie, at the bottom of the sign, in all white letters, were the words: "We wish Paul Kangas the best of goodbyes." Below that were the "NBR" and PBS logos.

Experts on “Surviving the Holidays with Healthy Finances” Mini-Workshops

Topics at each presentation include:

No prior knowledge is necessary to get the most out of these informative afternoons. Williams and Hoffman will share their money expertise in a down-to-earth style to help you manage your cash wisely for the upcoming holidays and for life beyond the festive season.

All programs will be held at the Alvin Sherman Library on NSU’s main campus, at in .

The mini-workshops are FREE and open to the public, but space is limited so sign up early by visiting www.nova.edu/library/main or calling 954-262-5477.

Attachment to the Miami Area Increases Significantly, Particularly Among African-Americans

MIAMI, FLA. (Sept. 29, 2009) – A Gallup study of the Miami area and 25 other U.S. communities has found that the worst economic crisis in decades does not play a key role in residents' passion and loyalty for Miami.

“While the pain from the recession is deep, other factors far outweigh economics when it comes to determining how emotionally attached people are to their communities,” said Warren Wright, managing partner for Gallup, which conducted the study with funding from the John S. and James L. Knight Foundation.

In 2009, the second of a three-year study, emotional attachment to the Miami area increased significantly.

The increase was largest amongst African-Americans, those living in lower-income, urban areas, the study found.

All We Want For Christmas

Consumer electronics comprise four of the top 10 items on adults’ holiday gift wish lists, with computers coming in second behind peace and happiness. Televisions, video game systems and cell phones also made the top 10. Nearly 80 percent of adults expressed interest in receiving a consumer electronics product as a gift this holiday season, an increase of four points from last year. Meanwhile, 84 percent of teens want to receive a CE product this year, up eight percent from 2007. The most popular CE products for teens this holiday are computers, video game consoles, portable mp3 players and cell phones.

Continue reading "All We Want For Christmas" »