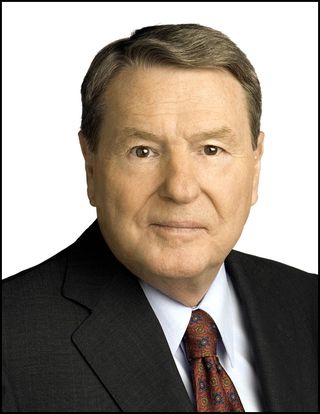 WPBT2 will host two dinners with Jim Lehrer, PBS NewsHour Anchor and also moderator of eleven Presidential Debates, on Wednesday, February 22 at the Kravis Center in West Palm Beach and Thursday, February 23 at the Coral Gables Country Club.  Ticket information for the dinners is available at wpbt2.org/lehrer.

Jim Lehrercame to PBS in 1972, teaming with Robert MacNeil in 1973 to cover the Senate Watergate hearings. They began in 1975 what became The MacNeil/Lehrer Report, and, in 1983, the MacNeil/Lehrer NewsHour, the first 60-minute evening news program on television.  When MacNeil retired in 1995, the program was renamed The NewsHour with Jim Lehrer.

In the last six presidential elections, Lehrer moderated eleven of the nationally televised candidate debates.  His latest book, a non-fiction work about the presidential debates, titled Tension City,was published in September 2011. At the WPBT2 dinners, Lehrer will discuss his latest book and give attendees a ringside seat for some of the epic political battles or our time, shedding light on some of the critical turning points and theoretical faux pas that helped determine the outcome of America's presidential elections.  He will provide antedotes from his experiences as "the man in the middle seat."

During the Evenings with Jim Lehrer, WPBT2 will also present Lifetime Service Awards to William F. Koch, Jr. and Herbert A. Tobin for their commitment to public television WPBT2.