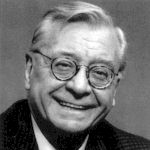 Don Taffner was a 40-year veteran of the television industry. He began his career in an international theatrical agency and founded his own company in 1963. Under his stewardship, this company has grown into an organization that produces and distributes programmes around the world. He represented Thames Television, selling their product in the US for the twenty-five years that Thames was a broadcaster in the UK, introducing and selling into the US such Thames programmes as The World at War, Rumpole of the Bailey and The Benny Hill Show. Don Taffner was particularly well known for the successful transfer of formats of Thames’ programmes into US television successes, taking programmes such as Man About The House and remodeling it into the US programme Three’s Company - similarly taking Keep It In The Family and developing the US programme Too Close For Comfort.

In the mid-80s Don Taffner became a shareholder in The Theatre of Comedy and from that point on his interest was equally shared between television and theatre, trying to bring a synergism between the two that would cross-fertilize each other, protect each other from the particular problems of each one individually so that both areas could prosper and a company such as The Theatre of Comedy could move from strength to strength.