You're Invited to the Optic Nerve XIII Film Festival!

In recognition of its 15th anniversary, the Museum of Contemporary Art, North Miami has broadened the scope of its annual Optic Nerve Film Festival featuring new short films and videos by artists. This year, in addition to selections from South Florida artists, films by artists from around the country will be screened. 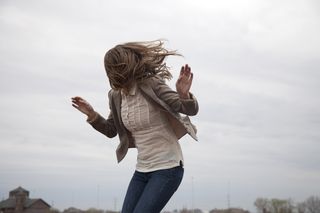 Optic Nerve XIII will be presented on Saturday, August 27 with two screenings at 7 pm and 9 pm at the Museum of Contemporary Art,  770 NE 125th Street,  North Miami, FL  33161.  The program includes 18 films by 15 artists and 2 artist collectives, all less than five minutes in length and made within the last two years which were selected from an open call for submissions.

One of the films will be purchased for MOCA’s permanent collection. The selection will be announced by MOCA Executive Director Bonnie Clearwater at the conclusion of the first screening.  Audience members will vote for their favorite film by ballot.    A reception will be held at 8 pm between the screenings with wines provided by Rex Goliath. 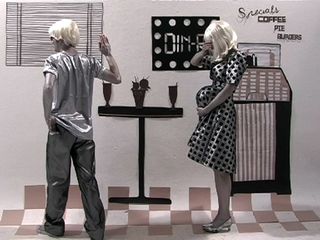 An artist ascends into the frame with the statement "I'm Emerging." in both English and Japanese, cuing her companion to do another push up which in turn enables the artist to add another gesture to a portrait she is drawing above her head.  At the 21st attempt,  she is finished and he is exhausted.

The artist uses a found photograph of a deserted, sparse landscape as the backdrop over which he video-collages his own totemic portrait as a woeful expression of loneliness.

What begins as care for an oozing wound turns into a lesson in painting and a portrait of deception.
Jennifer Campbell, Unbridled :18 min,  Seattle, WAThe artist constructs images by posing with a variety of props in ways that de-contextualization of both the body and the object.

Remake is a compilation of 16 distinct videos sourced from YouTube consisting of  the original shower scene from Alfred Hitchcock's 1960 thriller, Psycho and 15 amateur recreations of the same scene.

This film uses a traditional narrative to mimic a penny arcade machine - even to the extent that the characters within the story are themselves robotic, endlessly repeating the same actions and same story, raising  questions about our growing  dependence on new technologies and myths.

With a nod and a knowing half-smile, a girl suddenly breaks into a spasmodic dance of disorienting leaps, jerky falls, and floating zigzags. As the camera tries to follow  her sporadic dance, and keep its subject in the frame, it becomes a duet between camera and subject, subject and viewer.

This film is part of a series of experimental animations, which explores the complexity of cryptic images from dreams and the subconscious.  The main aspect of the project is to produce visionary narratives inspired by the illusion of fragmented realities and compile them into a usable pictorial catalogue.

This video which depicts random Puerto Rican citizens singing the Star Spangled Banner, amplifies the socio-cultural distance between Puerto Rico and the United States.   Many long for statehood yet often do not know the language of the country in which they wish to assimilate.

This one minute video is a single channel appendix to the sound and video installation “Twenty Angry Dogs", in which the artist asked 20 people to bark like an angry dog.

This cut out watercolor animation of a suburban bridal shower explores the persistence of traditional gender roles, social awkwardness and the way in which friendship has evolved over time.

This autobiographical video diary log (vlog) which the artist created for her unborn grandchildren was posted on YouTube, inspiring copycats and creating fans. Envisioned as an authentic solution to fleshing out the detached model of the family tree, the artist hearkens to bygone times when ancestors could glimpse one another through a locket or lock of hair. By placing the video in a public forum, the film becomes a study of why people ultimately share their personal feelings with anonymous strangers, and whether this sharing effects the actual emotional significance of the piece.

This new video series by the collaborative Ruben Millares and Antonia Wright, is a playful commentary on the somber issue of the devaluation of the arts and education in our society.  The artists physically and metaphorically tackle the bureaucracy and walls that uphold these systems and leaving the viewer feeling sympathy for Millares and Wright, yet laughing at the ridiculousness of the situation.

This film is a journey between layers of corporal consciousness, exploring the physical memory of trauma and the psychological repercussions of a surgical disaster.

Using strength, endurance and willpower, various men compete to see who can last the longest hanging onto a pair of ropes.

Billy The Kids depicts a group of teenagers pretending to be famous actors questioning life's meaning through a quirky "Cat In The Hat" rhyme scheme.

Artists D. Sadja and S. Martinez fuses elements of narrative film, music video and performance art in this story about two unsuspecting cowboys.  Marfa was shot in a single 18 hour period in Marfa, TX and is part of a larger body of video postcards depicting situations and narratives in various locations.

This film is based on the 2nd episode of the Devil Mahatmyam Epic, and takes its aesthetic from the original Star Trek series.  It is the last fight scene between Our Hero and the Demon.  The world was under attack by the most powerful demon, who took many forms, including that of a buffalo.  The gods, fearing total annihilation, endowed Our Hero with their powers and sent her into battle.  During their long battle the demon changes forms many times, and each time our hero chops his head off.  The heads that Our Hero has chopped off accumulated in a field of daisies and created pile of demon heads.

All films featured at this event will be available to view on uvuvideo.org.