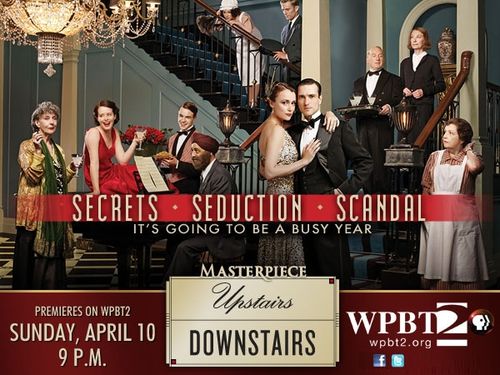 It’s 1936 and, sweeping away the cobwebs from the most famous address in MASTERPIECE history, a new couple moves into 165 Eaton Place. Thus resumes the romantic, moving, and epic story of Upstairs Downstairs, which premieres on Sunday, April 10 at 9:00pm on WPBT2. 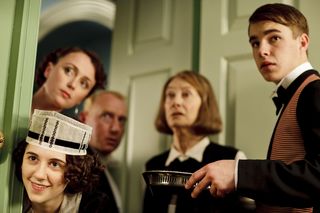 The story opens in 1936, six years after the Bellamy family moved out of 165 Eaton Place at the end of the original series. Recently inherited by young Sir Hallam Holland (Stoppard), the house has been long vacant and its considerable needs are taken in hand by Hallam’s vivacious wife, Agnes (Hawes).

Her first order of business is to hire servants, for which she retains Rose (Marsh), the proprietor of a domestic employment agency, although Agnes is unaware of Rose’s previous association with 165. After lining up a butler (Scarborough), a cook (Reid), a housemaid (Kendrick), and other staff, Rose realizes she may be of no further use to the new family.

And so it continues, just as it did thirty-odd years ago, with stories of the upper-

class and working-class intertwining in complex and interesting ways against a backdrop of world events—in this case, the abdication crisis of Edward VIII, the growing belligerence of Hitler and Mussolini on the continent, and the rise of the British Union of Fascists under Sir Oswald Mosley.

Amid the triumphs, disasters, joys, and tears, it’s just like old times at 165 Eaton Place.