WPBT2 Airs Forgiveness: A Time to Love & A Time to Hate
WPBT2 will premiere a four part series, Black in Latin America, a film by Henry Louis Gates Jr. on April 19th at 8:00 pm.

Thank you, Trevor Bannister, for years of smiles and laughter 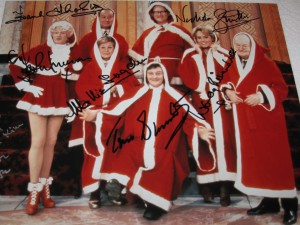 Trevor Bannister, known to British comedy fans worldwide as the twenty-something menswear salesman, Mr. Lucas, at Grace Brothers Department Store, has died at the age of 76. Bannister, who played the part of the rebellious Mr. Lucas from 1972-1980, always had the keen eye for Miss Brahms, played by the late Wendy Richard. Post Are You Being Served, Bannister had a long and successful career in television and on the stage. It was the stage that gave him reason to leave ABYS when he took a part in a long-running stage play, Middle Age Spread unable to appear in both. When Bannister asked that the weekly record day be changed from Friday to Sunday, the BBC refused opening the door for a post-Grace Brothers career.

It was Arthur Brough, the cranky senior salesman at Grace Brothers, who gave Bannister his start in show business when he hired him for an actor’s repertory company at the age of 15. In addition to the theatre, Bannister had roles in Keeping Up Appearances and Coronation Street. Most recently, Bannister was a regular cast member in Last of the Summer Wine.

Over the years, we were extremely fortunate to get to know Trevor interviewing him several times for our PBS productions, Celebrating Mollie Sugden, Funny Ladies of British Comedy, Funny Blokes of British Comedyand, most recently, Behind the Britcom: From Script to Screen. Trevor was always appreciative of his success and was the epitome of British humbleness when discussing his career accomplishments. The photo above was given to us by the cast during the production of our tribute program, Celebrating Mollie Sugden, in celebration of Mollie’s 80th birthday.