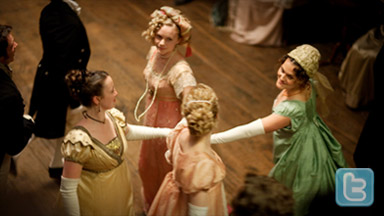 Celebrate with other Austen and Masterpiece enthusiasts during our Twitter party on Sunday, January 24th during the premiere of episode one of Emma. You're welcomed whenever you're watching, but during 9-11pm Eastern time, PBS and Masterpiece insiders, as well as Austen experts, will be tweeting too.

Tag your posts with the hashtag #emma_pbs and visit us on TweetGrid, or use your own favorite aggregator.

WHAT: PBS and Masterpiece are hosting a red-carpet premiere Twitter party (#emma_pbs)

WHERE: Join the party using our own custom Tweetgrid (Use hashtag #emma_pbs).

WHO: @pbs, @masterpiecepbs, Austen enthusiasts and YOU!

PARTY FAVORS: Participate from 9-11pm on January 24th for your chance to win Austen prizes.