Spending the New Year in the Keys?
CHAIRMAN MARTIN TO VISIT MIAMI, FLORIDA FOR DTV OUTREACH

TV’s Iconic Series The Electric Company Delivers a Jolt of Literacy,
and Charges a New Generation

Celebrities Plugged Into The Electric Company Include Wyclef Jean, Kyle Massey, Jimmy Fallon, Ne-Yo, Whoopi Goldberg, and Tiki Barber.   Sesame Workshop, the nonprofit educational organization behind Sesame Street, powers up this January with a new version of one of television’s most beloved children’s series, The Electric Company. The new series, designed to combat the literacy crisis America’s second graders are facing, has been re-energized with 35 half-hour episodes for today’s media-driven generation with a truly interactive experience. 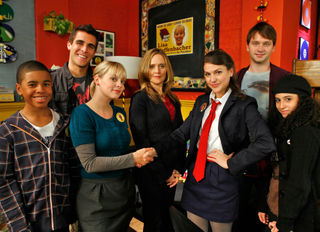 The Electric Company television show is brought to life with a 15 minute narrative storyline that is interspersed with segments that include curricular clusters of music videos, sketch comedy, animation and short films.
The cast of characters of The Electric Company is a group of do-gooders who keep the neighborhood safe with their literacy superpowers and solve problems often created by a group of troublemakers called “The Pranksters.” Stationed from their home base, The Electric Diner, the team consists of four core cast members.
Season one of the new The Electric Company will feature comedy segments with Academy Award winning actress, Whoopi Goldberg, kid comedian and actor, Kyle Massey, former NFL superstar and Today Show correspondent Tiki Barber, rapper Common and 30 Rock’s Jack McBrayer; music videos with Grammy Award winning musician Wyclef Jean and hip-hop superstar Sean Kingston; and original songs from singer/songwriter Ne-Yo, Saturday Night Live’s Jimmy Fallon and R&B star Mario.

The new Web site at pbskidsgo.org/electriccompany invites kids to experience the world of The Electric Company within an interactive environment. Launching in conjunction with the television program, the Web site blends elements of popular kid-friendly internet applications that encourage kids to create, share, and rate each others' video creations and decorate their own profile pages. Kids will also be able to play educational games, based on the curriculum featured in each episode, and win points in support of their favorite The Electric Company characters. The site will stream full episodes that will have aired the day before on TV, Web exclusive behind the scenes segments, cast interviews, outtakes, bloopers and celebrity clips. In addition, extensive downloadable outreach materials will be available to support the TV series and supplement the curriculum that parents, caregivers and teachers will be encouraged to use.
The Electric Company is part of PBS KIDS Raising Readers, a national literacy initiative focused on using public media to improve the reading skills for children ages two to eight. PBS KIDS Raising Readers is funded by a Ready To Learn grant from the U.S. Department of Education and the Corporation for Public Broadcasting.