Take a look at some of these classic clips on uVu. 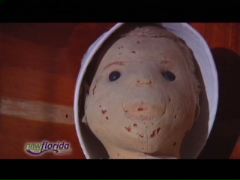 Clifford the Big Red Dog - Halloween
Halloween comes from the Clifford episode Boo. Emily Elizabeth dresses Clifford up in a lion costume for this scary holiday!

Florida Ghost Team Sneak Peek!
Get ready to be spooked this Winter on uVu. uVu has teamed up with the Florida Ghost Team to bring you webisodes of the team doing historical investigations in various locations around South Florida.